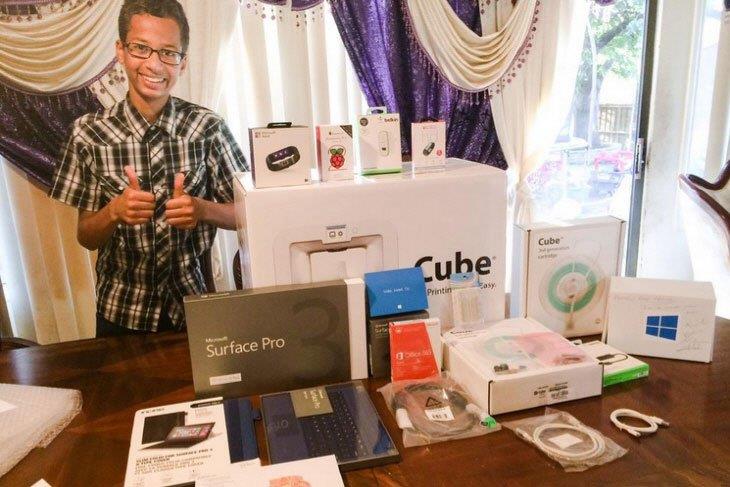 Muslim teen Ahmed Mohamed, who got arrested a few days ago for showing his teacher a clock he invented, has been getting support by several tech giants. Recently Microsoft has sent Mohamed some gifts including a Microsoft Surface pro 3, an Office 365 subscription, a Cube 3D printer, A Raspberry Pi 2 computer and a Microsoft Band fitness tracker. Since his unfortunate arrest by the local police, the 14-year-old from Texas has been getting support not only from tech companies all over the world, but from several celebrities, CEOs such as Mark Zuckerberg, and President Obama himself who tweeted: “Cool clock, Ahmed. Want to bring it to the White House? We should inspire more kids like you to like science. It's what makes America great.”

Mohamed was also offered internships and events invitations from Google, Twitter, Reddit, etc. Many public figures have shown solidarity for the high school student wandering if the whole thing would have happened at all if the guy’s name wasn’t Ahmed Mohamed and if he wasn’t a Muslim. The #IStandWithAhmed hashtag was soon created and used over and over by people who support Mohamed’s creativity and are against similar situations happening to Muslims.

The ‘hoax bomb’ the student was accused of building inside a pencil case, was in fact just an alarm clock, which according to Mohamed’s father, Ahmed had been using for some time to wake up in the morning. Even though Mohamed  told the local police that his invention was just a clock, the teen was handcuffed anyway and wasn’t allowed to call anyone, while his father was not allowed to speak to his son or look at the supposedly “hoax bomb’ until the police cleared the situation.

“We always ask our students and staff to immediately report if they observe any suspicious items and/or suspicious behavior,” according to the MacArthur High School's statement CNN received. “If something is out of the ordinary, the information should be reported immediately to a school administrator and/or the police so it can be addressed right away. We will always take necessary precautions to protect our students and keep our school community as safe as possible,” the statement continued.

Mohamed plans to transfer to another high school and said that he wants to continue his studies at MIT in the future. Currently he is attending various events he got invited to and is happy about all the support he has been getting during the last few days. “It gives him hope," Mohamed’s father said for CNN. "Right now he is trying to just stay positive and is listening to the news about him and reading about people's comments him on social media. It's really too much for him to take in right now, but long term it will be good for him. He doesn't want to show he is a victim,” he added.