How will the future of tech and media look like? Michael Wolf, co-founder and current managing director of technology and media consulting-firm Activate, gave a huge presentation on the future of tech and media outlook in 2016 at The Wall Street Journal Digital Live Conference at The Montage in Laguna Beach, California on October 20, 2015. Former Yahoo board member showed that the average American spends more time on tech and media than sleeping or working, while predicted that over the next five years, the consumer tech and media industry will grow by over $500 billion, from $1.7 trillion in 2015 to $22 trillion in 2020.

Among Wolf’s top nine Insights Into Tech and Media for 2016 were: By carefully analyzing every minute in an average American adult’s day, the report concluded that due to multitasking, the average American adult has 31 hours and 28 minutes of various activities in one day. During the course of 31 hours and 28 minutes were included activities like, sleep, eating and drinking, social media, work and education, video, audio, gaming, reading, etc. Surprisingly (not), over half the total amount of hours is spent on tech and media, which included video, audio, gaming, reading, and social media activities. Approximately 7 hours is spent on sleep, 6 hours on work and education and the rest of over 7 hours is spent on other non-work activities such as cooking, housework, fitness, eating and drinking, etc.

Interestingly enough, Wolf’s insights showed that it is pretty easy to build a billion dollar business by only capturing a few seconds of an average American’s daily attention. Companies like Shazam, Vice, BuzzFeed, VOX, ZocDoc, etc, only capture less than a minute of the average user’s daily attention.

As the technology evolves every minute, more and more opportunities of multitasking are offered, which means that multitasking will continue to grow even faster in the near future. One of Wolf’s key insight points was messaging, which according to him, ‘has been the fastest-growing online behavior within the social landscape over the past five years, passing social networks.’ By 2018, messaging is expected to add 1.1 billion new users. Currently  U.S. founded messaging apps Facebook Messenger and WhatsApp are globally dominating, leaving behind Chinese WeChat and QQ Mobile, iMessage, Viber, Line, Snapchat, etc. “Almost half the growth opportunity for messaging players is in the Middle East & Africa; North America presents a significant opportunity if messengers can displace SMS,” explained Wolf,  while predicted that Apple’s platform control could support smarter apps, while new consumer businesses built on messaging platforms will expand as messaging bots become more ubiquitous.

Regarding the streaming audio winners, Wolf said that the number of digital players will continue to grow while customers spend more and more time on digital audio. As of 2014, an average American adult spends 4:05 hours per day on digital audio, driven by multi-tasking opportunities while doing other activities such as exercising, working, driving, etc. YouTube keeps dominating the online music, followed by Pandora, Spotify and VEVO. The research also found out that 66% of online music listeners do not share their listening activity on social network, thus giving any player a chance to make a lot of profit by improving the sharing experience. “By 2020, digital music revenues will be $10 Billion globally, and streaming will be over half of that - growing at the expense of downloads,” Wolf predicted. 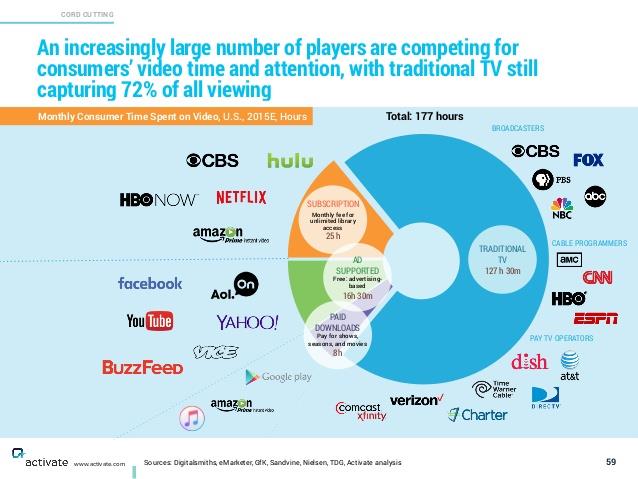 As we have seen during the last few years, Podcast consumption has exploded and is expected to do so in the future. In the meantime, many players keep competing for capturing users’ attention, while 72% of all viewing attention is still captured by traditional TV. “There is this misconception that millennials aren’t watching TV. They’re watching a ton of it — more than 20 hours of TV a week,” Wolf said. He continued saying that the long-awaited cord cutting moment might happen in 2019 if it follows the telephone take pattern, which is not likely, meaning that it might take us more than a decade to finally experience the cord cutting moment.

Wolf shared these 4 reasons why:

A new player, in order to become a potential ‘cable killer’ “needs to to be cheaper and have a better user experience,” Wolf said. “All it takes is writing checks. It would take very large checks,” he added.

Now that video gaming is including a wider spectator audience, it is becoming “one of the most widespread consumer behaviors with 2 Billion highly networked and connected users worldwide – and growing.” Top video games include League of Legends, Dota2, Fifa15, Call-Duty, Clash of Clans, Destiny, Puzzle and Dragons, World of Tanks, Candy Crush, Super Smash Bros and Mario Kart 8.

For everyone out there that dreams of getting rich in the app store, Wolf said that that dream is already over now. Even though the number of apps has doubled since 2013, only the top 20 developers take most of the money, while the majority of top apps by unique visitors such as Facebook, YouTube, Google Search, Gmail, Twitter, Google +, Instagram, etc.,  do not generate any app store revenue. Only 5 apps (Google Play Music, Pandora radio, Apple Music, Snapchat and Netflix) out of the top 20 apps generate app store revenue. While other companies such as Airbnb, Oscar, Square, and Slack are only using the app store “for distribution and engagement, but not monetization.”

To read Wolf’s full presentation you can click here.