TIOBE Index for October 2015 - Java the most popular programming language, Objective-C drops out of the top 10 index, replaced by Ruby 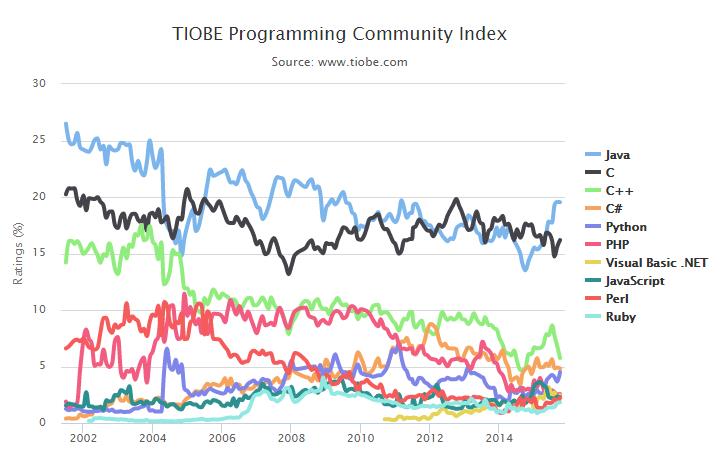 The TIOBE Programming Community index, an indicator of the popularity of programming languages which updates the index every month, showed that Apple’s announcement on switching from Objective-C to Swift caused Objective-C to drop out of the TIOBE Index top 10 for October 2015. Objective-C was soon replaced by scripting language Ruby which managed to enter the TIOBE index top 10 again. “Ruby's small revival is a bit surprising. The language was a genuine hype between 2006 and 2008. [...] It even became TIOBE's language of the year 2006. The hype stopped quite abruptly when Twitter announced to shift from Ruby to Scala in 2009. The hotness was over. Scala was the new thing. Without evangelists, Ruby dropped out of the top 10 and had to reinvent itself,” according to a TIOBE statement.

The index continued with these other programing languages that managed to be included in the TIOBE’s top 20: Delphi/Object Pascal, Assembly language, Visual Basic, Objective­-C, Swift, Pascal, MATLAB, PL/SQL, OpenEdge ABL, and R. TIOBE ratings, which are based on the number of skilled engineers world­wide, courses and third party vendors, uses popular search engines such as Google, Bing, Yahoo!, Wikipedia, Amazon, YouTube and Baidu to calculate the ratings.“It is important to note that the TIOBE index is not about the best programming language or the language in which most lines of code have been written. The index can be used to check whether your programming skills are still up to date or to make a strategic decision about what programming language should be adopted when starting to build a new software system,” TIOBE clarifies.