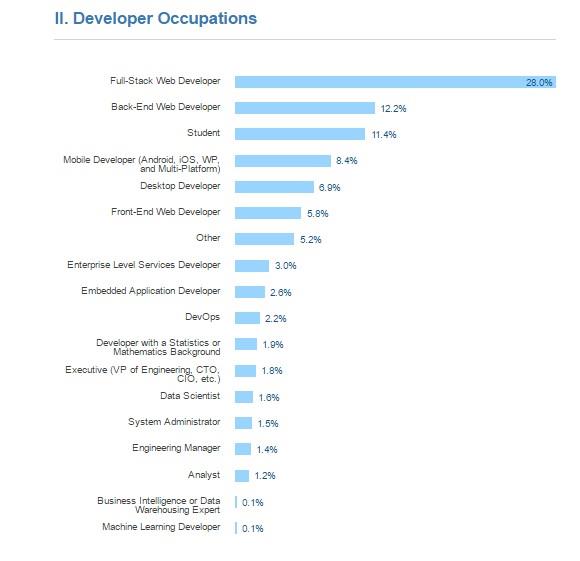 If we compare what skills a full-stack developer for example was required to have back in the 2000’s, the difference to almost two decades latter is almost uncanny.

Stack Overflow’s Developer Survey Results 2016 which includes what developers that have taken the survey like and don’t like, their experience, education, etc, found out interesting results about developers’ occupations.

While most of the developers that take part in Stack Overflow surveys do know what their job and other developers’ occupation is, there is still a lot of confusion about what jobs like Front-End Web Developers, Machine Learning Developers, Full-stack Web Developers, and DevOps are all about.

According to SitePoint Full-stack developers “are comfortable working with both back-end and front-end technologies. To be more specific, it means that the developer can work with databases, PHP, HTML, CSS, JavaScript and everything in between, also, venturing as far as converting Photoshop designs to front-end code.”

Among the main technology stacks a full-stack developer is required is to have are:

What is front-end development?

According to The Guardian, “Front-end or client-side development is a relatively obscure Internet discipline. Historically, this role has been known under several aliases, htmler, web designer, coder, frontender and so on, but its core functions remain the same while expanding with the progress of the Internet. It is a hinge role that requires both aesthetic sensitivity and programmatic rigor.”

A front-end developer is required to have HTML and CSS skills as well as know how to use JavaScript.

According to abouttech.com “A Web developer is someone who programs Web pages. A Web developer is more focused on the way a website works than how it looks. They typically use HTML text editors and work with databases and programming languages as well as HTML.”

Among some of the required skills from a web developer are HTML, CSS, JavaScript, Ajax, PHP, ASP, Java, Perl, or C++, MySQL Database, and Project management.

While different companies don’t necessarily require DevOps to have the exact same skills for different jobs that are offered, some of the main skills DevOps Engineers include Linux/Unix Administration,SQL and MySQL,  ability to use various open source technologies and cloud services, some knowledge of programming languages such as  PHP, Python, Ruby, etc.