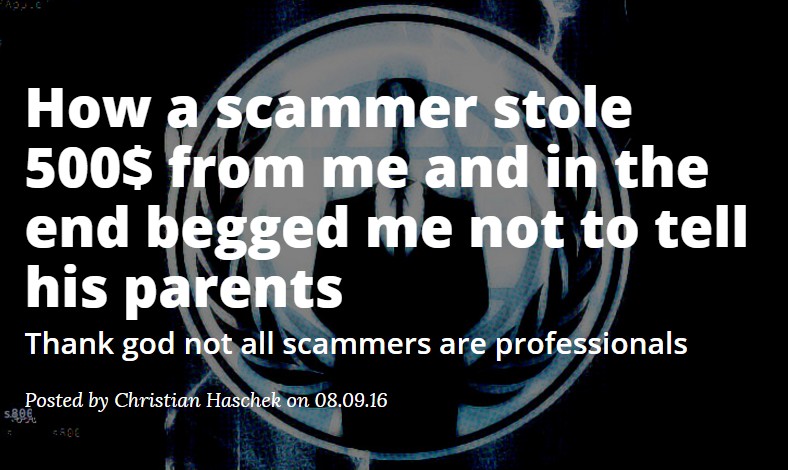 If you found out that you have been scammed online, in most cases, you would just accept the fact that there is no way you can get your money back and you’ll move on. Well, not in the case of Security researcher Christian Haschek who was able to not only track down the scammer, but also get his money back.

After winning the Solar winds sysadmin contest back in 2012, Haschek was trying to use or sell his $500 Apple store gift card, but because he had been living in Austria, it wasn’t possible for him to use the gift cart, and so his journey to sell it online began.

“My last attempt to sell them was via reddit. I know there are a lot of scammers out there. So I thought Bitcoin would be the right choice since the scammer can't just reclaim their money after I gave them the card codes. [...] The scammers first contact came via reddit. His usernames are changed for reasons you'll find out later. Since I had nothing to hide I gave them my real identity to build trust,” Haschek wrote on his blog post.

Even though he tried his best to stay away from scammers and find someone who would buy his gift cart, he still got scammed by a guy. who for some time, had been scamming other people trying to sell gift cards online as well. Because the scammer was using the same username on other sites on the internet, even after he deleted his account on reddit, Haschek was able to track down the con artist after four days. The scammer had been using the same name on other websites, including freelance websites where he had also listed his skills hoping to get recruited.

Haschek was then able to find his family on Facebook, and got an answer back by the scammer, only after he had written messages to his brother and mother introducing himself, and telling them about the problem, and that he would not press charges against the con artist if he got back his money and got assured that he would not scam any more people anymore.

“10 minutes later I had the facebook profiles of his whole family. Brother, father, mother, cousins. I found multiple photos of him on his mothers profile I thought I'll save them if I need to go to the police. I added his older brother who is in college and wrote him and his mom this nice message,” Haschek wrote.

So far, the story how the security researcher caught the scammer has been viewed by over 140.000 people since September 8, 2016 when it was first posted.